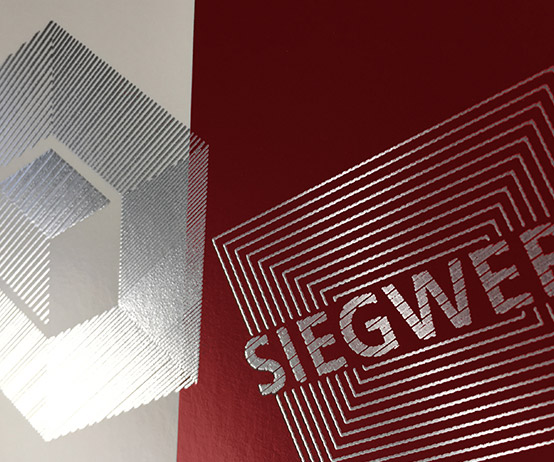 What you should know when printing metallic inks?

Metallic inks are one example for creating special effects on printing substrates. They are based on conventional inks enriched with metallic pigments. Are there any differences between UV, solvent- and water-based metallic inks that users need to keep in mind in order to successfully print them?

Rolf Montag: “Indeed, printing UV metallic inks is more difficult than using solvent- or water-based metallic inks. It can sometimes lead to a non-satisfactory print result, unless you know the risks in advance. Like other inks, UV metallic inks are made of a dispersion of brass or aluminum particles in a liquid medium and, on the face of it, there is nothing about them to reveal why they should be harder to print. Yet, there are a number of important differences that do make UV metallic inks harder to print.”

What are examples for special properties of UV metallic inks?

Rolf Montag: “The most important properties differentiating UV metallic inks from solvent- and water-based metallic inks are for example that there is hardly any shrinkage while the UV ink dries, that the ink consists of a chemically reactive binder matrix, has a higher ink viscosity than solvent-based inks and has to deal with drying challenges due to the competition between reflection (shine) and curing. These characteristics of UV metallic inks might lead to printing problems and could impact for example the stability, chemical resistance or drying properties of the ink. Therefore, it is important to keep these special characteristics in mind for both the ink formulation and the ink processing at the print shop in order to generate the best print quality.”

Which starting materials are used for silver, gold and copper shades?

Rolf Montag: “The starting material for silver is aluminum at a purity of at least 99.5%. Shades of gold are based on brass in other words a copper-zinc alloy, and the starting material for copper shade is pure copper. Different alloy ratios of copper or zinc are employed to produce the standard shades of Rich Gold (70/30), Rich Pale Gold (85/15) and Pale Gold (90/10).”

How are metallic pigments manufactured?

Rolf Montag: “To produce the pigment particles, the hot molten metal is atomized into tiny solidified beads by a spray method using compressed air or nitrogen. These particles are separated out by sifting and screening and classed according to the respective end product requirements. For aluminum pigments, the particles are ground in ball mills with a waxy lubricant and an inert solvent until the tiny spheres have been converted into more or less platelet-shaped, flaky pigments. With gold-bronze pigments, the grinding step can be done dry, without any solvent. Pigments formed in this manner are called flakes. Spherical aluminum particles formed specifically into round disk-shaped pigments are called silver dollars. These produce a higher, brighter shine for a comparable particle size. The lubricant/additive coats the pigment homogeneously and protects it against oxidation or other chemical attack.”

Aluminum pigments are produced by using another method, right?

Rolf Montag: “Yes, when producing aluminum pigments, there is another, much more elaborate method known as the VMP method – VMP stands for vacuum metallized pigments. In this case, the aluminum is vapor deposited onto a plastic foil in a vacuum and then separated off again. Pigment particles produced this way are much thinner compared to ground flakes, and have an ultra-smooth surface. Silver colors with VMP pigments reach a very high shine or even an effect much like a stamping foil or metallized surface.”

The purpose of every metallic ink is to achieve the highest possible shine - regardless of the ink technology or printing method used. Which factors are impacting the shine of metallic inks?

Rolf Montag: “The shine of metallic inks depends on various factors like for example the shape, size, alignment or floating behavior of pigments. Furthermore, viscosity of the ink as well as ink coverage, type of coverage and printing speed have an impact on the level of shine. When using UV metallic inks the shrinkage of the ink also plays an important role for the level of shine and brilliance.”

What is needed to reveal the greatest possible shine?

Rolf Montag: “To achieve the greatest possible shine, the aim is to achieve the flattest possible alignment of metallic pigments in the film of ink. If the pigments lie flat against each other, then they form a smooth, flat surface that reflects the incident light symmetrically, so in a strict direction. When this is the case, the surface appears shiny and uniform. When the pigments do not rest flat enough against each other or lie parallel to the surface, then they do produce a metallic effect, but one with a grayer, darker character. The alignment of the pigments depends on the wetting of the pigment particles. If they are well wetted from all sides, then they sink or float freely and unaligned in the ink film. If the wetting is not so perfect, however, then the binder tends to surround each pigment particle uncleanly, and there tends to be floating in the ink film («leafing»). The positive effect of this phenomenon is that this floating leads to a very good alignment of the pigment particles on the surface and thus to a higher shine. This is also the reason why no UV metallic inks are marketed whose pigments do not float, otherwise they could not be described as a silver or gold shine.”

Is there also any disadvantage in this context?

Rolf Montag: “Yes, for the sake of clarity, it should be mentioned that floating pigments that are not cleanly bound in the film can be scraped off the surface more easily, meaning such surfaces often have slightly poorer resistance to scuffing or poorer suitability for lamination or overprinting.”

Which impact does this have on the different printing technologies when using UV metallic inks?

Rolf Montag: “It stands to reason that lower viscosity and lower printing speed favor the floating effect before the ink system is cured under the UV lamp. Considering the ink viscosity and printing speed, it is therefore logical that the best metallic surfaces are achieved with UV screen printing (low-viscosity inks) and the worst are achieved with UV offset/UV letterpress printing. UV flexographic metallic inks are somewhere in the middle. It also stands to reason that greater ink coverage results in a stronger shine of the substrate surface.”

How does the described “leafing effect” influence the different kinds of metallic inks?

Rolf Montag: “Regarding the «leafing effect», wetting and thus the alignment of the pigments on the surface, one could say that, given the lack of a solvent, UV metallic inks have a disadvantage, since the solvent causes appreciable shrinkage of the ink film upon drying (generally > 50%; for UV inks only about 2–5%). Even in well wetted metallic pigments, this shrinkage of solvent-free and water-based printing inks leads to a good particle alignment, which produces a beautiful shine. In the case of solvent-based and water-based metallic inks – unlike in all UV metallic inks – the fact that the pigments in such non-leafing metallic inks (i.e. non-floating pigments) are well embedded in the ink film results in better mechanical resistance and good overprintability. If you keep all these characteristics in mind when printing metallic inks – especially the special distinctions of UV metallic inks – you should gain the desired print result with an optimal metallic effect.”