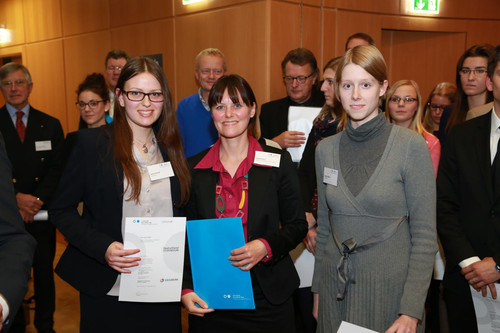 Every year, Siegwerk supports two especially outstanding chemistry and biology students at the Bonn-Rhein-Sieg University with a scholarship. At the 2014 scholarship celebration on December 10, Daniela Kern (Team Manager HR at the Siegburg site) presented the current pair of beneficiaries with their certificates and represented Siegwerk in a panel discussion about the promotion of young people.

In the framework of the Deutschlandstipendium campaign, Siegwerk has been supporting two students at the Bonn-Rhein-Sieg University every year since 2010, The young talents, annually selected among the university’s best performing and most motivated applied science students, receive a monthly grant of 300 euros for the entire year. In a celebration ceremony on December 10, 2014, all the 2015 scholars received their certificates from their respective supporters.

“We want to support tomorrow’s top achievers actively,” says Daniela Kern, Team Manager HR at the Siegburg site. “With the Deutschlandstipendium, we are able to help outstanding students develop their potential early on, while simultaneously rewarding their successes and performance to date.” Daniela Kern presented the two new Siegwerk scholars Daniela Müller and Jessica Rumpf with their certificates and was glad of the opportunity of meeting the two students personally. Jessica Rumpf is in her third term of a Chemistry with Materials Science course, while Daniela Müller is majoring in Applied Biology and also in her third term.

The ceremony was rounded off with a panel discussion on the topic of “Deutschlandstipendium – a successful career building block?” Here, Daniela Kern exchanged her thoughts on the promotion of young people with representatives from the university, from companies and with scholarship beneficiaries. Representing scholarship sponsors in the area of applied sciences, she explained Siegwerk’s reasons for participating in the Deutschlandstipendium program as a global player – and the importance Siegwerk attaches to regional networking. “As a traditional, family-owned company with historical roots in Siegburg, we see a duty to assume responsibility in the region,” she said. “That includes supporting and promoting students and regional universities. In addition, we are obviously interested in pointing potential future employees to Siegwerk as an attractive employer at an early stage. Due to demographic change and increasing global competition, this is becoming more and more important to us as a company.”