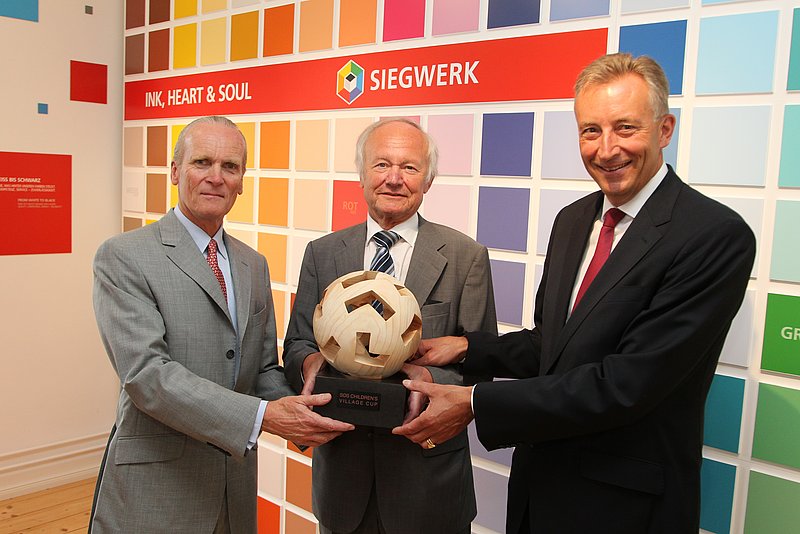 Siegwerk has been supporting SOS globally for a number of years. In 2010, the company financed a family house in the SOS village in Mexico City. Two years later, it supported the foundation of an SOS training center for mothers in Lipa (Philippines). In 2013/2014, the printing ink manufacturer took over sponsorship of the SOS Children’s Village Poá in Brazil for the first time, making a significant contribution to the village’s running costs. To date, Siegwerk has donated several hundred thousand euros to the SOS Children’s Villages.

“Siegwerk has been a strong partner to the SOS Children’s Villages for years, a partner for impoverished children all over the world,” said Professor Heiner Schumacher of SOS-Kinderdörfer Global Partner in Munich. “More than anything else, Siegwerk has understood the changing demands faced by help organizations and in development cooperation. The primary focus is no longer to invest in houses and villages. Rather, we need to furnish existing facilities with the financial resources to make a good and sustainable contribution in the fight against poverty. The running costs are the pulse of a village.”

“I’m especially pleased that we are among the first to receive this wonderful award,” said Siegwerk CEO Herbert Forker. “We Siegwerkers are wholeheartedly committed to this cause. Social work for children is a tradition in our company. In the SOS Children’s Villages worldwide we have found a real partner with whom we can implement the majority of our corporate social responsibility projects effectively.”
The SOS Children’s Village Cup is awarded to companies that do an outstanding job of supporting an SOS Children’s Village as sponsors.

About SOS Children’s Villages:
SOS Children’s Villages is an independent, non-governmental social development organization. SOS was founded in Austria in 1949 by Hermann Gmeiner. His basic idea still holds true today: every child should benefit from having a mother, brothers and sisters, and be able to live in a house and a village, growing up with a feeling of belonging and security. Based on these four simple principles, SOS children’s villages have grown over the years into an international organization that helps children and their families all over the world.

Funded mainly by individual donors, SOS operates 546 villages in 133 countries, as well as 1,800 additional facilities such as kindergartens, schools, youth facilities, vocational training centers, and medical centers (hospitals). In 2013, SOS supported more than 2 million children and their families. SOS is also ready to set up emergency relief programs in order to help victims of natural disasters.